It is with great sadness that I learned about the death of Grandmaster Fu Sheng Yuan on 27th March. With him, the Tai Chi world loses a superlative exponent of Yang Style Tai Chi and one of the last 5th Generation descendants of the Yang family.
Sincere condolences to his family.

Like Grandmaster Zhao Youbin, Grandmaster Fu Sheng Yuan was a 5th Generation descendant of the Yang family. They were cousins, as their fathers, Zhao Bin and Fu Zhong Wen, had married into the Yang family and in addition were both disciples of Yang Cheng Fu.

In October 2013, I was fortunate enough to meet Master Fu Sheng Yuan on the occasion of an international instructor training and certification seminar organised by the Chinese Wushu Federation in Tai’an (Shandong Province). I was struck by his warm-heartedness and his simplicity.

Among members of the certification panel were Master Zhao Youbin (2nd from left), Master Fu Sheng Yuan (4th from left) and his son Fu Qing Quan (James, 1st from right). 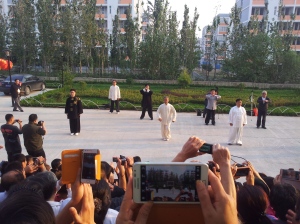 At the end of the seminar, masters of all Tai Chi styles demonstrated their art together. 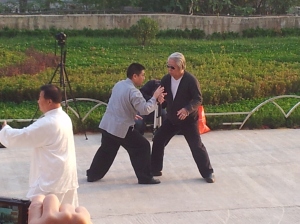 During that performance, Master Fu pushed hands with his son. You can guess the outcome!

Master Fu Sheng Yuan was the only person outside China to be awarded by the Chinese Wushu Association with the Grading of 8th Dan (Silver Dragon Badge) and James Fu his son was awarded with a 6th Dan (Gold Tiger Badge). James Fu has since achieved a 7th Dan grading.

[This short biography is based on information found at http://staging.fushengyuan-taichi.com.au/gallery/fu-sheng-yuan%5D

As is well known, Master Fu’s father, Fu Zhong Wen, is the author of Mastering Yang Style Taijiquan, the book whose translation into English by Louis Swaim is regarded as the definitive guide to Yang Style Tai Chi by all practitioners of the art outside China.

You can watch Master Fu pushing hands with his son here:

and here you can watch him doing the 85 form:

In short, I'm a Taiji Quan practitioner looking to generate interest in, and enthusiasm for Taiji in as many people as possible in Montenegro and neighbouring countries.
View all posts by John Rogers →
This entry was posted in Taiji. Bookmark the permalink.
%d bloggers like this: